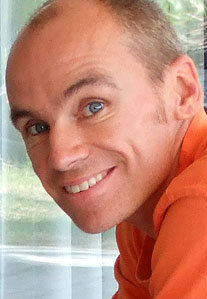 Hi, I’m Karl Carpenter, and I’m the principal of Mousebuilt. We are a small, family run business and we’re happy that way. We have no plans on growing this business into some franchised giant.
I genuinely enjoy building websites and helping small businesses achieve their goals.

I’ve been building websites professionally since 1997, just 6 years after the World Wide Web was launched. Prior to Mousebuilt, I ran a company called Image Canteen, and I still enjoy looking after some long-term clients over there. A few years back I decided there was a better way to build websites and started developing Mousebuilt.

One of my favourite anecdotes will tell you all you need to know about why I’m not interested in making this business too large:

The fisherman and the businessman

An American businessman was standing at the pier of a small coastal Mexican village when a small boat with just one fisherman docked. Inside the small boat were several large yellowfin tuna. The American complimented the Mexican on the quality of his fish.

“How long it took you to catch them?” The American asked.

“Only a little while.” The Mexican replied.

“Why don’t you stay out longer and catch more fish?” The American then asked.

“I have enough to support my family’s immediate needs.” The Mexican said.

“But,” The American then asked, “What do you do with the rest of your time?”

The Mexican fisherman said, “I sleep late, fish a little, play with my children, take a siesta with my wife, Maria, stroll into the village each evening where I sip wine and play guitar with my amigos, I have a full and busy life, senor.”

“Instead of selling your catch to a middleman you would sell directly to the consumers, eventually opening your own can factory. You would control the product, processing and distribution. You would need to leave this small coastal fishing village and move to Mexico City, then LA and eventually NYC where you will run your expanding enterprise.”

The Mexican fisherman asked, “But senor, how long will this all take?”

The American laughed and said, “That’s the best part. When the time is right you would announce an IPO (Initial Public Offering) and sell your company stock to the public and become very rich, you would make millions.”

“Millions, senor? Then what?”

The American said slowly, “Then you would retire. Move to a small coastal fishing village where you would sleep late, fish a little, play with your kids, take a siesta with your wife, stroll to the village in the evenings where you could sip wine and play your guitar with your amigos…”